I am a busy Mom, I don't want to make Multiple meals... My Family 2018
Let me start by saying, I currently have one toddler and we are discussing trying for number two. I used to work a full time job in pharmaceutical manufacturing in Plasma Operations and Global Planning Ops. I am used to being "busy" and personally, I prefer it.  Prior to that I was in a Clinical setting with one of the top Cancer treatment facilities in the US.  I worked on the business side managing Retention and ultimately,  Revenue cycle.  So, why did I share this?

I went from a very busy "run around" daily schedule to a sedentary one. It really started while I was pregnant. There was a LOT that happened while I was pregnant and I was placed on bed rest early. I gained a ton of weight.  When I moved with my husband to the state of New York from the South we made the decision that even though I had interviews lined up and his company asked him for months, "is your wife settled and ready to start now?" (he is also in Pharma Mfg), it was best for me to stay home with our daughter.  In doing so I decided it was time to work on me and get back to my "normal" or better. I did not have the excuse of "no time" anymore. My problem was finding what worked!

Now, this next part will sound familiar to MOST of you reading this.  I have a picky eater in my house.  Nope, not my toddler, my husband! When I met him he would cook salmon for himself 1x a week, ordered Omaha steak meals, or ate frozen meals from the grocery store. His only "cooked meal" he got from the company cafeteria.  He was a runner in college and has a high metabolism. So, eating JUNK did not really have an effect on him, because he ran multiple times a week.  He eats nonstop. We have dinner and he wants to follow that up with his container of cashews and a tea.  Later he will go and grab cottage cheese. He used to grab pringles everyday until I stopped buying them! I do still buy him the occasional Milka bar .  But, since we moved, he went from running multiple times a week to maybe a few times a month. He never ate vegetables before me and even now he still asks "what is this?" when I put them on his plate. I have to follow up with "it's called You eat it".

My toddler is not as picky (thank god). Mainly because our pediatrician told me to give her as many things as possible to ensure she did not develop allergies and so her taste buds could experience different foods. He also said, "if she turns something down, give it a week and try again, always come back around with it. Never give her the same food on repeat." When he told me that, it STUCK. My daughter eats ANYTHING that I have. This was the main reasoning for why I started the ketogenic diet and gave up soda. Once she started pulling up and walking she went straight for whatever myself or my husband had. While my husband still eats muffins or pastries in the morning, and occasionally gives this to my daughter, her normal breakfast is whatever I am having.  Eggs, bacon, sausage, keto banana nut muffin, pumpkin square, etc. The only things she does not have, is coffee.

No, my husband and toddler are not 100% keto, but I also do not make myself a special meal and them something different. We ALL eat the same thing, but I may just add an additional side to theirs. 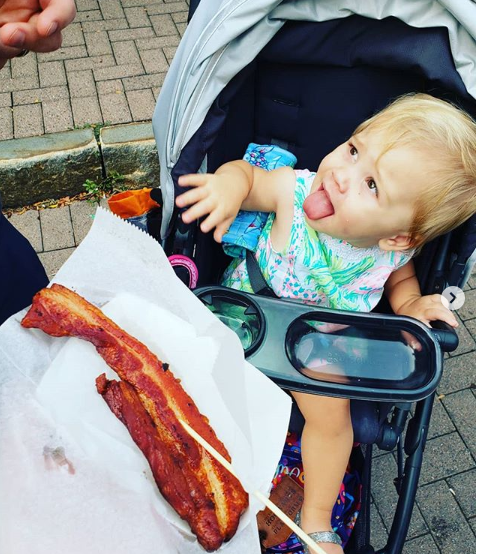 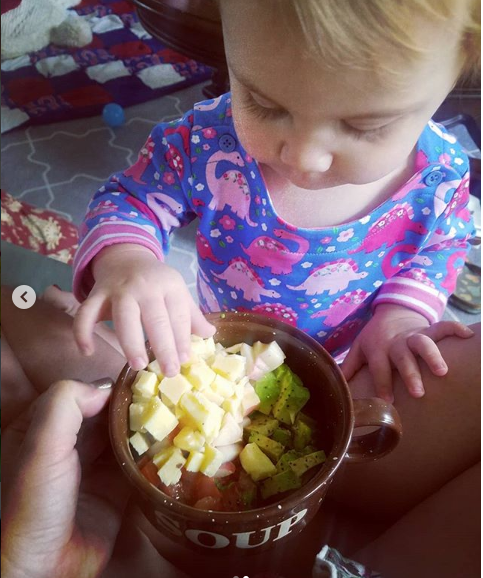 I truly believe that your children want what you have. So this may make some people angry, but if you're sitting on the couch eating a bag of candy, guess who else is going to want to sit on the couch and have candy... your kid(s).

If you have not watched "The Magic Pill" on Netflix, it is ok! Most people who start a ketogenic diet decide to do so after watching a random documentary. Oh, who are we kidding, anyone who starts any kind of new lifestyle does so after watching a documentary or reading research that convinces them that it is "the correct thing to do". I will say I have watched MANY food documentaries in the past. I have juiced before, I have tried not eating meat before, and nothing really clicked (for me) until I started the ketogenic lifestyle. In the magic pill the one story that stuck with me was the little girl who only wanted goldfish crackers and would refuse to eat the food prepared for her for days (screaming because she wanted goldfish and nuggets). Then after a few weeks in, suddenly she loved vegetables and would even use a fork, for the first time, and eat it on her own. I personally did not want a child that only wanted junk food. When my daughter was a small baby, first eating solids, I was very picky about what foods I would give to her. I often even made her food myself and put it into pouches.

I am a firm believer that Sugar is a drug. Just like a person can be addicted to cocaine or alcohol, I think there is a possibility of sugar addiction. I still swear to this day that Little Debbie's must have crack in them. If I have one cake or brownie I cannot stop thinking about them and will eat an entire box. 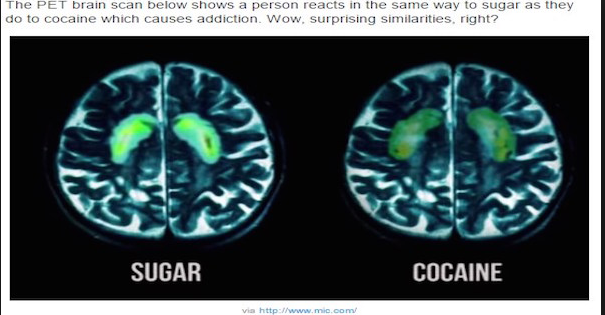 "Eating sugary foods makes people hungry and tired, and causes them to gain weight. Refined sugar is void of minerals needed for enzymes, can cause mineral deficiencies, interferes with the actions of calcium and magnesium, increases inflammation, increases erratic brain cell firing, and has been implicated in aggression.

Sounds like someone coming off of drugs or on drugs, right?

I also have Plantar Fasciitis. I recently had someone ask me had I noticed better symptoms with this now that I have been cutting sugar. I originally told them no, and then quickly realized that the only time I do have flare ups is when I have eaten things non - ketogenic (with sugar). Why? Sugar feeds inflammation. This "bell" that went off when putting those two things together was more proof to me as to why I need to stick to this lifestyle.

So, what do I feed my family? That was the whole point of this blog post right? Let me list out a few sample meals that are my "go to" meals. If you do not give them OPTIONS, they eat it! It may be hard at first, but just trust that you are doing the right thing, and eventually they WILL eat when they are hungry. I know for me personally, food starts tasting different once I have been off of sugar and empty carbs. Do not drive yourself batty making multiple meals. Make one meal that you ALL eat. And if you need to substitute in some extra sides in the beginning, then do so, but in small portions!  For instance, I will make an Annie's Mac n Cheese single, and give my daughter and husband 2 spoonfuls each (about half the container) and save the rest for another meal later. Just note, those "extra sides" are not for you!  I never give them a large portion of the "Non Keto" foods. I cook everything with Kerrygold butter, Coconut oil, or Olive oil and often I even mix MCT oil into salad dressings or slaw. So far, all is going well with this. My husband even prefers cooked meals to frozen or take out for work now. My daughter eats anything we put in front of her and even picks off of our plates. #Success 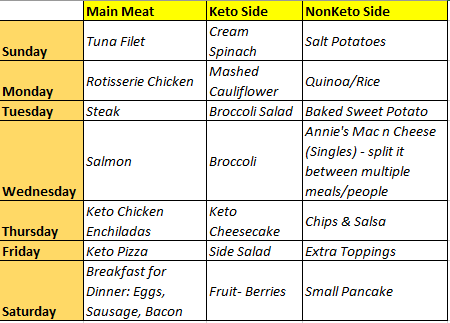 Getting an entire family on the same track is not easy. I know when I was growing up, whatever new diet my Mother was trying out, so was the rest of the family. I know there was moaning, groaning, and belly aching. It was annoying. But I also know anytime my Mother did this and got us all eating healthier, I felt better, had more energy, and was thankful for it in the end.

I hope this has helped ease some of your minds. Hopefully it also gives you the encouragement to continue not only your ketogenic journey, but to slowly ease the rest of your family into a healthier lifestyle.

Think You child would never eat this way? THINK AGAIN! If you remove the Goldfish - they will eat the real Gold! 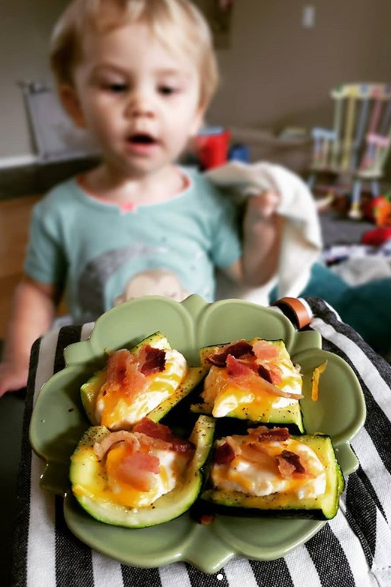 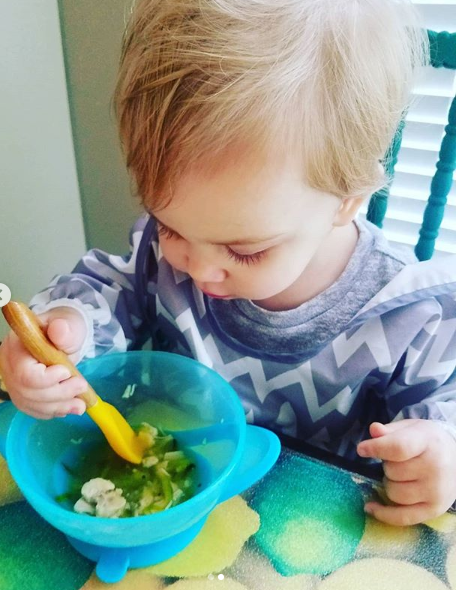 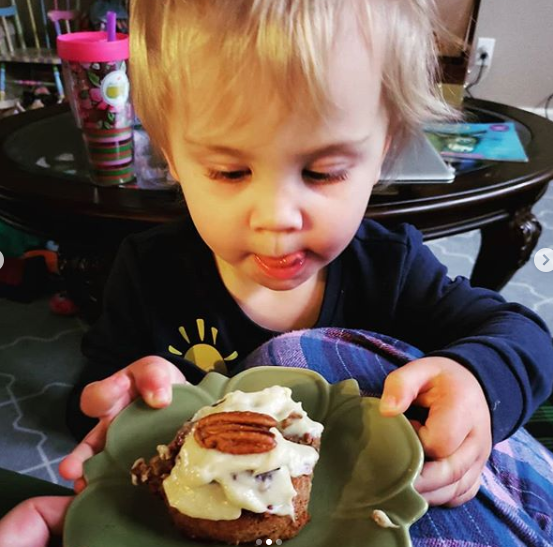 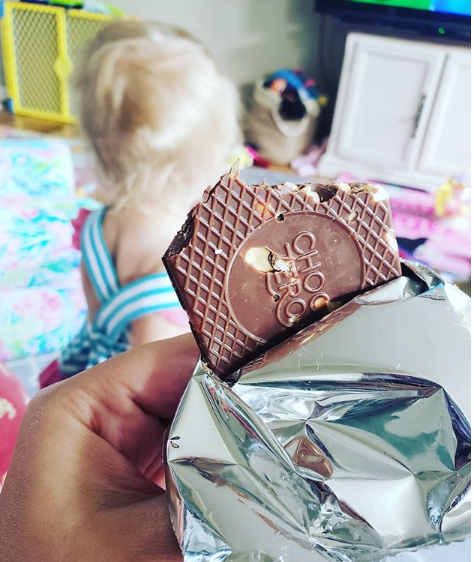 FTC Disclaimer Required for all Influencers:

I am a content creator and an Amazon Influencer. I am also a partner or affiliate with multiple brands. I partner with brands to gain discounts and giveaways for my audience. The links posted throughout my website I may earn from by you making purchases or utilizing the codes for a discount for yourself.

Thank you for supporting my business! My Privacy Policy is located at the bottom of the main website page, I do not sell any information or collect information personally. If you would like to be added to my Newsletter register under Berry Blasts on the Home Page.